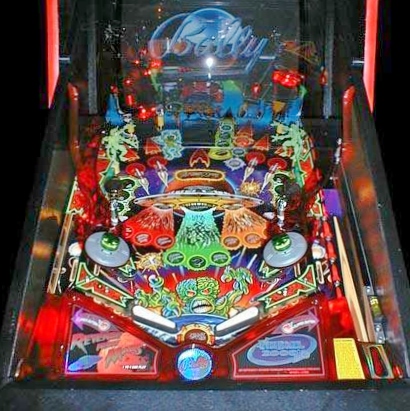 Revenge from Mars is a pinball machine manufactured by Midway (under the Bally label) released in 1999. It is the sequel to Attack from Mars, that also has the same theme.

This game was the last machine manufactured by Midway and the first to use the Williams Pinball 2000 system that overlays interactive video onto the mechanical playfield (see also Star Wars Episode I).

An additional first was the default non-existence of a replay/special. Instead of awarding the player a free game when reaching a certain amount of points, it was decided to rather award extra balls (default at 50 million and 200 million). Additionally the match sequence at the end of a pinball game (a random free play award) was discarded. This default behavior can be changed by the operator though.

Contact Us Today to learn more about this pinball machine and any costs associated with shipping.